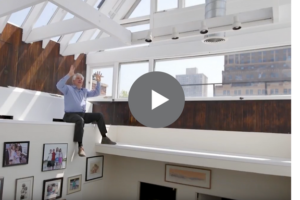 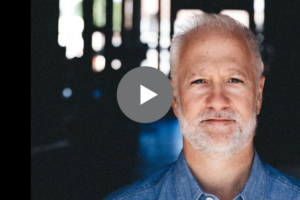 “Meaningful Work” by Shawn Askinosie is one of the most important books I’ve read in the last decade.  It covers those topics which I hold dear in my life:  what does your soul desire most; turning sorrow into joy; and finding meaning in your life’s work.  (Edited audio interview from Real Estate Success Rocks Podcast) 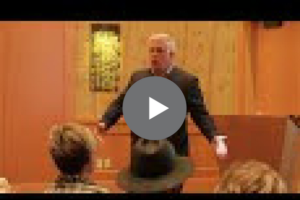 In 2004 my nephew Charlie and I traveled to Bhutan.  It was a glorious trip:  his first international destination, discovering Aman Resorts, falling in love with Chai tea, our first Rimdo in a small monastery outside of Thimphu, bringing in the New Year with our guide’s family while sharing their porridge, but mostly being together and experiencing a different way of being.

A decade later I more or less invited myself on a trip that my friend Cheryl was considering.  Bhutan was pretty much the same; Thimphu had grown somewhat and a very large gold Buddha was planted on a hill above the city which seemed un-Bhutanese to my eye.  But it was still that glorious, mystical land of the Thunder Dragon.

So many lessons learned that second time around…

Our band of merry travelers were an interesting amalgam of souls.  Most tourists who visit Bhutan have a strong spiritual side as was the case here.  We were easily divisible into three groups which I later discovered had great meaning for me. 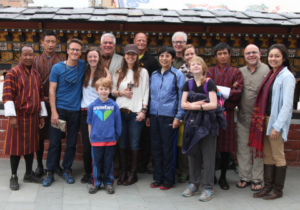 My friend David, along with Mark and Rock made up the highly competitive, funny, smart, successful, ‘Type A’ guys.  They are goal oriented, in-shape, spiritual, and focused on building wealth.  It is a sexy combination. 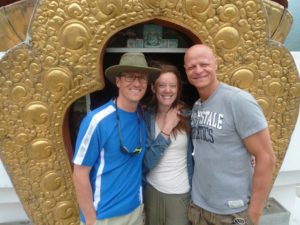 The second trio included David’s daughter Cheaven, who was studying Transpersonal Psychology at Naropa University, grounded and funny Leigh who was our yoga instructor, and the insightful and deeply connected Anna who left a very successful business career to become an amazing painter.  The contrast between the men and the women, the masculine and the feminine, was dramatic. 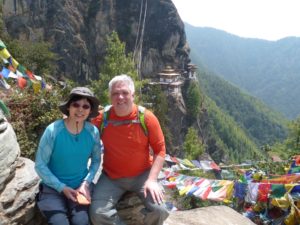 And then there was one of most beautiful families I’ve ever encountered.  The Perkins are open, loving, curious, and smart, raising two very wise children while owning a whiskey distillery in Utah.

We were led by our travel guide, the elegant and exotic Cristy who like me was searching for something….some knowing, some clarity, some thing. 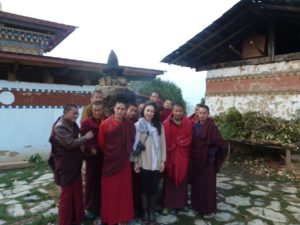 My Dad use to say “If you are going to do something, then do it right.”  I saw the guys as doing their business and financial futures ‘as right’.  I was doing less than.  I saw the gals as deeply connected to their bodies and to God.  I was not on that level.  And I could only imagine having a family and being in relationship like the Perkins.

I wasn’t doing anything as well as my fellow travelers; or so I thought.  Mind you, this was 2014 and in most peoples’ minds I was successful in business and in life.  So why did I feel less than?  Well, that is a long story and ultimately doesn’t matter.  What does matter is that I was continually comparing myself to David and Mark and Anna and Leigh and the Perkins and even to their young son, let alone everyone else that I would encounter.

And what is really funny is that I didn’t want to live my life like the guys or the gals or even the Perkins.

It is painfully obvious that comparing myself to others is a futile and damaging mental process.

So what did I eventually learn?

On a side note, I commissioned two paintings from Anna including the one below.  Her ‘Knowing’ is deep and is reflected in her art.  Anna’s Web Site 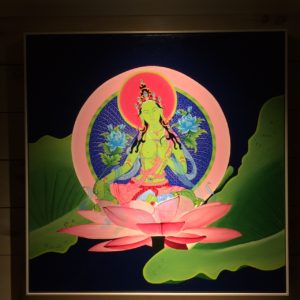 I’ve been dreaming about writing this blog for many years.  I was never clear what the message was, so I waited.  And now it is time.

OomphBlog is about my journey and the lessons I’ve learned.  It is about turning sorrow into joy, exploring who you are on a soul level, and what does it mean to be fully alive.

And ultimately, it is about other ways of thinking, feeling, working, living and being.

This is my gift to me and to you.